After reviewing the suggestions from the last post and a few emails I received, I narrowed down the list for the Part Deux of the Weird Words to say Out Loud game.

Let’s jump right into it. And like the last list, I included the phonetic spelling so you can say them out loud. You know you’re sitting there by yourself so go for it, no one’s listening:

This one was a suggestion from my fellow blogger at momuverse. While the definition really means this: the formation of words whose sound is imitative of the sound of the noise or action designated, such as hiss, buzz  and bang —
I think this word reminds me of something my son would say when he was being potty trained. Can’t you hear your child at one end of the store screaming at you so loud everyone in the place can hear him, “Mom, I-wanna-go-to-peah”

Not only is this a fun word to say out loud, it is one of the greatest utensils ever invented. Spork – when a fork just isn’t enough to help you eat all that saucy goodness in your bowl.

I promise you this is REALLY a word! It’s what you get when you mate a donkey with a zebra. I’m not exactly sure how a zebra and a donkey cross paths to end up with a zedonk but come on, admit it, the word’s just funny. I don’t care who you are, that’s funny. 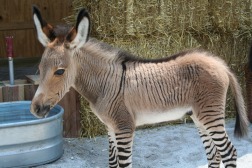 I had to include this one because it was one of the few words I found during my search that’s spelled the same way you pronounce it. Just say it – blip blip blip … it reminds me of the sound from my first video game, Pong. Does anyone remember that game? You hit the little ball-line-thing and it would go blip blip blip.

This is one of those long confusing medical words that makes people want you to stay home and take a day off from the office so you don’t infect anyone else. When I say this word it reminds me of something Dr. Seuss would make up just to get something to rhyme with the word rhinoceros. I can see it now:

This is a fun word which means a group of folk singers suddenly break out in song and people start dancing around. While I can appreciate an impromptu folk music dance party, I like to say the word with my favorite Georgia Dawg accent and use it like a southern expression: She’s such a snot, she walks around like someone stuck a hooten up her nanny. She so needs to get voted off the island.

Thanks to my favorite Golden Retriever blogger at The Daily Golden for this one! The definition for this word has to do with being ‘full of wild schemes.’  Now don’t get yourself worked up here – this isn’t an x-rated 5 3/4 shades of grey post. Get your mind out of there, you’re better then that.

This word is more fun to say when you use it in a sentence. The definition is to confuse, muddle, or perplex; to make stupid with drink. Maybe because its college football season but I had to include this in the list. As Chef from South Park once said, “There is a time and place for everything. It’s called college.” And just like Chef said, I spent many nights during my college years being completely befuddled.

Another good one from momuverse! I know this is a fancy word for a riddle but it reminds me of a coffee drink at Starbucks. Don’t know what to do? Have another cup of conundrum. I’m sure the answers will come.

I honestly can’t add anything more to this – its genius in terms of nonsense words from author Lewis Carroll. He was truly the master of words that are weird to say out loud:

“Twas brillig, and the slithy toves

Did gyre and gimble in the wabe:

All mimsy were the borogoves,

And the mome raths outgrabe.

Beware the Jabberwock, my son!

The jaws that bite, the claws that catch!

Beware the Jubjub bird, and shun

These are my new favorites to be added to the original list of weird words. Got any that you’d like to add to this list and maybe we can do a Part Three?