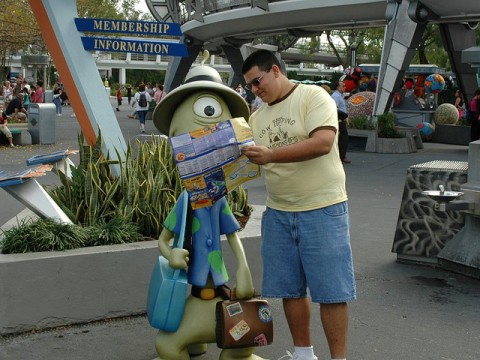 Last week I heard a story on the news about a woman who hit an animal while driving in a part of town where the tourists gather in Orlando. Like a good citizen, she called the police to report the incident. Turns out she didn’t really hit a large animal but a Chinese tourist crossing the dark part of the road. Fortunately the man wasn’t hurt. Mostly, he was just freaked out and was taken to the hospital to treat his minor injuries.

Those of you who don’t live in the Orlando area are probably thinking horrific things about how something like this could have happen. But for those of us who live here …. we can only think one thing. It’s officially the start of Tourist Season.

Most cities experience the different seasons with the changes in the weather or activities associated with them. I’ve heard people from up north talk about Fall being the ‘change of seasons.’ Then there’s hunting season, fishing season, harvest season and skiing season (Is that really some kind of season? What do I know, I live in Florida).

In Orlando, we have Tourist Season. Every year we jockey back and forth with Las Vegas for the number one tourist destination in the US. I’m not sure if we’re number one or two right now but it never seems to stop the tourists from all over the world to travel to our city. They usually start coming in April when spring break starts but the season really kicks into full force in June when school lets out.

Once Tourist Season starts, there is a basic understanding with us locals to avoid certain parts of the city, like International Drive. This road is the main drive where the tourists flock during their vacation. One day I made the mistake of driving down the road to get to a meeting in that part of the world. During off-season, this road can actually be used as shortcut to get to some really cool meeting places. I must have been on auto-pilot that day and found myself sitting on I-Drive. The traffic usually backs up on that road and the masses wearing white-tube socks up to their thighs were actually walking past me faster then the traffic was moving.

Then came the Tourist Season moment. I realized why the traffic wasn’t moving on the road. One of the tourists in their lovely rental car had decided he wanted to turn left across four lanes of traffic. Normally this wouldn’t have been a problem except he was sitting in the far RIGHT lane. I was like, dude… really?

It seems something happens to these people when they come to Orlando and start driving around. Take this one day when I was on Interstate 4. This highway is our main artery that connects Orlando to everything – northeast takes you to Daytona and southwest leads you to Tampa. It’s a huge 8 lane road that’s a constant source of traffic problems during rush hour.

So I’m driving on I-4 trying to get somewhere and something to the right of me caught my eye. A car full of a tourist family had apparently missed their exit to go downtown. Most normal people would have gone on to the next exit and then turned around to get back on the highway. But not this guy. He literally stopped on I-4, backed up his car until he reached the exit and then moved over TWO lanes to finally get off on the downtown exit.

Are you freaking kidding me? Last time I checked, Orlando was still located in the United States and I’m pretty sure our driving laws are the same as they are in your city. I mean, come on people … what are you thinking?

Don’t get me wrong here – we don’t have a problem with tourists being in our city. We know how much they contribute to our economy and many of my friends have worked either inside the theme parks or in the marketing department. We get it. We know why you save you save up thousands of dollars all year long to bring your kids on a week-long trek through Disney, Universal Studios and Sea World.

We’re not asking you to stay home. We’re just asking you to be mindful of your driving while you’re enjoying your time in Orlando. Think about it folks, it is Tourist Season and if you’re not careful, you could get hit with a car. And chances are, it won’t be from one of the locals. We know how to drive in our city.

3 thoughts on “The Season of the Tourist”